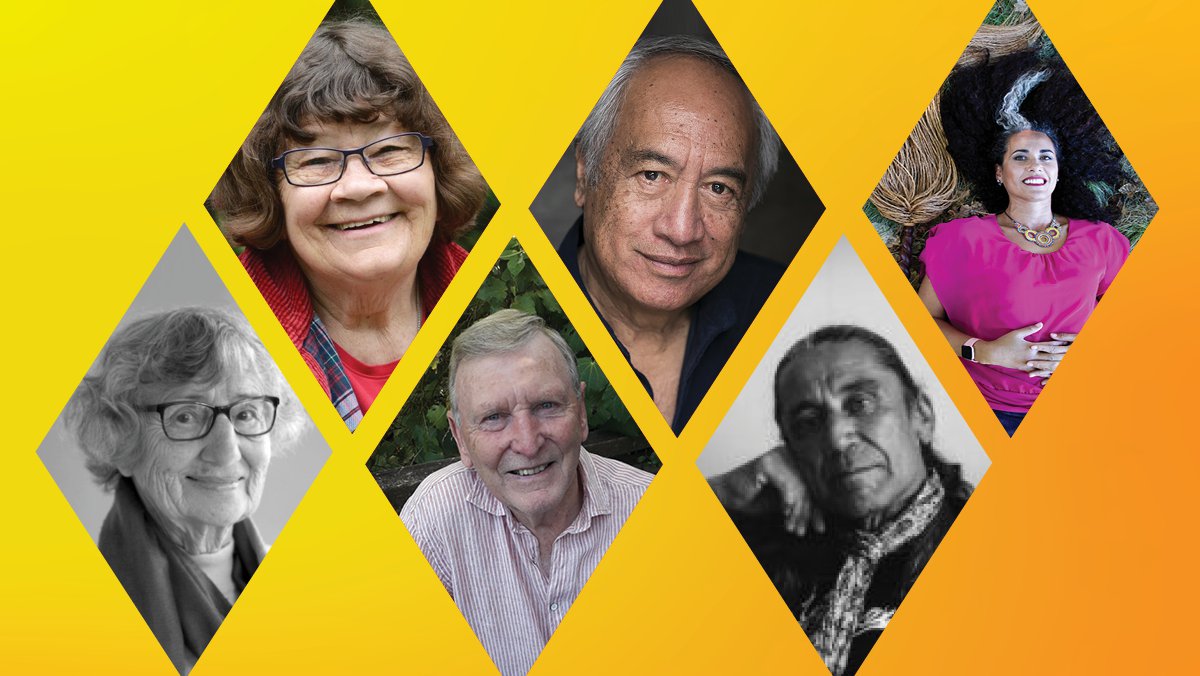 In 2022 Read NZ Te Pou Muramura proudly celebrates 50 years. Writers are at the heart of what we do, both in the enduring success of our Writers in Schools programme and in our wider work to promote reading to all Kiwis as a super power which can positively transform individuals, communities and our country. A prominent part of the literary landscape in Aotearoa New Zealand, the Book Council Lecture, now the Read NZ Te Pou Muramura Pānui is an opportunity for one of our country’s leading writers to discuss an aspect of literature close to their heart.

Joy Cowley is a prolific, widely-published and much-celebrated writer of fiction for adults and children. Cowley began her career writing short stories and novels before moving into the realm of children’s literature. She has published numerous novels, as well as short stories that have featured in journals, anthologies and book-length collections. She has written a remarkable range of children’s books and stories, often illustrated by renowned artists. Cowley was made a Distinguished Companion of New Zealand Order of Merit for services to children's literature in 2005, and she was awarded a Prime Minister’s Award for Literary Achievement for Fiction in 2010. In 2018, Cowley was made a member of the Order of New Zealand.

Witi Ihimaera was the first Maori to publish both a book of short stories and a novel, and has published many notable novels and collections of short stories. Described by Metro magazine as ‘Part oracle, part memoralist,’ and ‘an inspired voice, weaving many stories together’, Ihimaera has also written for stage and screen, edited books on the arts and culture, as well as published various works for children.

His best-known novel is The Whale Rider, which was made into a hugely, internationally successful film in 2002. His novel Nights in the Garden of Spain was also made into a feature film, and was distributed internationally under the name of Kawa. The feature film White Lies was based on his novella Medicine Woman. And his novel Bulibasha, King of the Gypsies inspired the 2016 feature film Mahana. His first book, Pounamu, Pounamu, has not been out of print in the 40 years since publication.

He has also had careers in diplomacy, teaching, theatre, opera, film and television. He has received numerous awards, including the Wattie Book of the Year Award, the Montana Book Award, the inaugural Star of Oceania Award, University of Hawaii, a laureate award from the New Zealand Arts Foundation 2009, the Toi Maori Maui Tiketike Award 2011, and the Premio Ostana International Award, presented to him in Italy 2010. In 2004 he became a Distinguished Companion of the Order of New Zealand, in 2017 France made him Chevalier de l'ordre des Arts et des Lettres and the same year he received the NZ Prime Minister’s Awards for Literary Achievement.

Renée is a rangatira of Aotearoa literature. She has been awarded an ONZM for services to literature and drama, the Prime Minister’s Award for Literary Achievement, the Playmarket Award for a significant artistic contribution to theatre, and Ngā Tohu ā Tā Kingi Ihaka for a lifetime contribution to toi Māori.

Born in 1929, with a whakapapa that is Ngāti Kahungunu, Scots and Cape Verdean, Renée left school at twelve. At fifty she started writing plays, novels and poetry, with Wednesday To Come her most loved work. In 2017 she published her memoir, These Two Hands, and in 2019, her first crime novel The Wild Card, a Ngaio Marsh Awards finalist.

Renée has described herself as ‘a lesbian feminist with socialist working-class ideals’ and her writing puts women centre stage. She lives in Ōtaki, writing and teaching.

Dr Selina Tusitala Marsh is of Samoan, Tuvaluan, English and French descent. She was the first Pacific Islander to graduate with a PhD in English from The University of Auckland and is now a lecturer in the English Department, specialising in Pasifika literature. Her first collection, the bestselling Fast Talking PI, won the NZSA Jessie Mackay Award for Best First Book of Poetry in 2010. Marsh represented Tuvalu at the London Olympics Poetry Parnassus event in 2012; her work has been translated into Ukrainian and Spanish and has appeared in numerous forms live in schools, museums, parks, billboards, print and online literary journals. As Commonwealth Poet (2016), she composed and performed for the Queen at Westminster Abbey. She became New Zealand's Poet Laureate in 2017. Her debut children’s book and memoir, Mophead: How Your Difference Makes a Difference, was awarded the Margaret Mahy Book of the Year – 2020 New Zealand Book Awards for Children and Young Adults.

Owen Marshall, described by Vincent O’Sullivan as ‘New Zealand’s best prose writer’, is an award-winning novelist, short-story writer, poet and anthologist, who has written or edited 30 books, including the bestselling novel The Larnachs. Numerous awards for his fiction include the New Zealand Literary Fund Scholarship in Letters, fellowships at Otago and Canterbury universities, and the Katherine Mansfield Memorial Fellowship in Menton, France. In 2000 he became an Officer of the New Zealand Order of Merit (ONZM) for services to literature; in 2012 was made a Companion of the New Zealand Order of Merit (CNZM); and in 2013 he received the Prime Minister's Award for Literary Achievement in Fiction. In 2000 his novel Harlequin Rex won the Montana New Zealand Book Awards Deutz Medal for Fiction. Many of his other books have been shortlisted for major awards, and his work has been extensively anthologised.

In addition, in 2003 he was the inaugural recipient of the Creative New Zealand Writers’ Fellowship, and was the 2009/10 Antarctica New Zealand Arts Fellow. In 2006 he was invited by the French Centre National du Livre to participate in their Les Belles Etranges festival and subsequent tour, anthology and documentary. He was the President of Honour of the New Zealand Society of Authors 2007–08 and delivered the 2010 Frank Sargeson Memorial Lecture.

He was a school teacher for many years, having graduated with an MA (Hons) from the University of Canterbury, which in 2002 awarded him the honorary degree of Doctor of Letters, and in 2005 appointed him an adjunct professor.

Ben Brown (Ngāti Mahuta, Ngāti Koroki, Ngāti Paoa) writes children's books, non-fiction, poetry and short stories for children and adults. Born in Motueka (1962), the father of two has been a tobacco farm labourer, tractor driver and market gardener. Since 1992, he has been a publisher and writer, collaborating with the illustrator, Helen Taylor, in most of his 17 publications. Ben is a regular in the Read NZ Te Pou Muramura's Writers in Schools programme. He currently lives in Lyttelton.

Many of Brown's books have a strong New Zealand nature background. Brown and Taylor were short-listed in 2005 for the Te Kura Pounamu Award in the LIANZA Children's Book Awards for Nga Raukura Rima Tekau Ma Rima, the Te Reo edition of Fifty-Five Feathers. The English edition was also shortlisted for the Russell Clark Award in 2005. He was awarded the Māori Writer’s Residency at the Michael King Writers’ Centre for 2011.

In 2020 Brown presented the annual Read NZ Te Pou Muramura Pānui (lecture) titled If Nobody Listens Then No One Will Know, which received wide-spread acclaim. His Pānui affirms the vital importance of writing, reading and knowing each other through our stories; it explores the complex concept of youth justice in Aotearoa.

In early 2020, Brown taught a writing workshop at Te Puna Wai ō Tuhinapo, the Oranga Tamariki Youth Justice Residence facility at Rolleston near Christchurch. The workshop was part of Writers in Youth Justice, a Read NZ Te Pou Muramura Writers in Communities programme. This workshop resulted in an anthology of poetry by the YPs (Young People) who took part titled How the F* Did I Get Here*, edited by Brown.