Lesa MacLeod-Whiting is an award-winning Wellington based comedian, writer, improviser and one of the brains behind the popular Shut Up and Dance classes. Lesa took time out from her busy schedule of gigs and rehearsing her upcoming Fringe show, Sealed Section, to have a coffee and a chat with us this week. Her coffee of choice? A cold brew with oat milk and maple syrup. 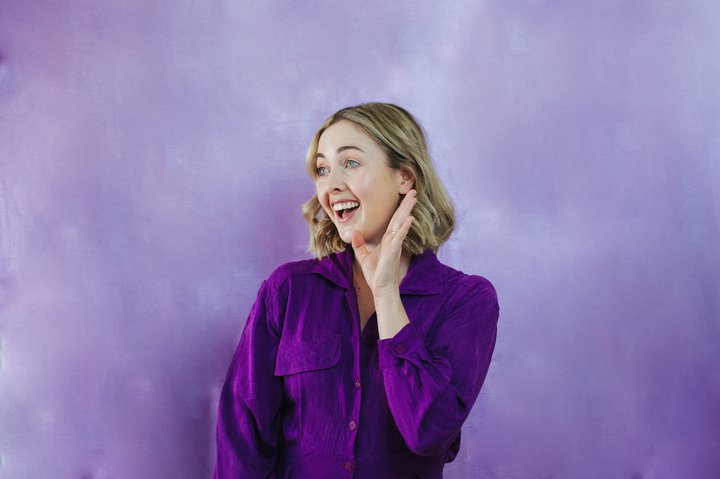 To be honest, it’s not something I ever thought I’d do. Improvising was my first passion; I like not having to remember lines. During the lockdown, my husband issued me a challenge while we were watching Taskmaster. He said he could see me on a show like that and I told him it was unlikely because all the contestants were stand-up comics and he challenged me to give it a shot.

So I signed up for a women’s/non-binary open mic and watched some comedy shows to see how they actually work, and went for it. I thought I’d hate it, but I loved it from the moment I picked up the mic. And then I got booked for two more shows as soon as I walked off stage, so…

I love how deeply personal stand-up is, how vulnerable you are when you step on stage as yourself as opposed to improv where you get to be someone else, or many other people.

Is it harder being a woman in stand-up?

So many women have already answered the question about whether women are funny and proved they are. I think the challenge is that you have to be both a woman and an activist whereas white male comics can just show up and do the show and leave it at that. It’s their privilege. Sometimes it can feel lonely or frustrating when you're the only woman on a line-up but that generally only happens at open mics where the line up isn't curated. But I still believe it's important for me to show up to those male-dominated line-ups and hold space to show women in the audience that they are welcome there. If I’m booked, I want to be on a bill for my own merit, because of my material. I turn down shows if it feels like they’re booking me to be the token woman.

There are so many emerging spaces for women and non-binary performers. Things like Femmes and Thems which is such a fantastic platform for women and non-binary people. The audience is there for that humour and is so supportive. There is more and more of this happening in Wellington and there are so many funny women here that I feel privileged to work alongside. It’s a really supportive and collegial community. There are awesome producers out there (of all genders) booking super exciting, diverse shows and they're starting to outnumber traditional stand up shows. That's super encouraging. It just makes sense - for your audience and for the scene.

I also want to add that I don't have any beef with male comics haha. There are so many good eggs out there who I love performing, writing and collaborating with.

Tell us about your worst onstage experience and how you made it through.

I’ve actually been pretty lucky. I mean, sometimes you can’t control the atmosphere in a space, and sometimes there’s just one bad egg in the audience. I remember spending a whole show dealing with a heckler called Boris who just wanted to finish every joke for me. But audiences in New Zealand tend to be pretty reserved, so heckling isn’t as common as it is overseas. You almost need to give them permission to laugh.

I’ve done improv shows for three people, and that’s hard. I was in LA and performed for a tiny handful of people. I was with my cousin and we’d decided to do this show on a whim and we hadn’t rehearsed. We were over there doing a writing course and we basically had to bribe the audience with beer. They were almost all Kiwis (including a very well known film producer) and I was dressed as a Scottish man and my moustache fell off and fell down my cleavage. My sweaty cleavage! Plus, I was eight weeks pregnant and spent the whole show trying not to throw up. But you just have to keep going.

What or who inspires your work?

So many people! Michelle A’Court and Justine Smith are just masters of holding a room and are such incredible champions of women on the scene. They’re very supportive. And of course, all of the people I perform with in Tiny Dog! That's the improv troupe I perform a monthly show with at Bats and they're all hilarious, talented and gorgeous humans.

Maria Bamford, an American comic whose work is just so out there and dark. She does characters; she does her entire family. You should check out her specials on Netflix. They’re really different.

Hannah Gatsby, of course and Rose Matafeo. I really like James Acaster too. And I’m really into this podcast called The Guilty Feminist because it really champions the voices of othered performers, women, disabled comics, non-binary comics and the like. It champions the idea that women’s stories are funny and can be shared on stage.

And weirdly, I was really inspired by some of the stats we saw when I was working at the Film Commission, about women making the majority of decisions about which films to see. It inspired me to put my own experiences out there because if women are making the choices about what to go to, it makes no sense for their stories and voices not to be in the mix. Twelve men on a bill just doesn’t make sense when you know these stats.

I know you are not only a hilarious comic, but you also run a business. How do you balance the needs of both?

I have an incredibly supportive partner who understands that I need to do this and how important it is to me. I think I knew I wasn’t suited to full-time, stay at home parenting and I’m lucky to have so much support.

And running my own business means I can choose my own hours and be flexible around whatever else I have going on. My business partner is also a mum and we designed Shut Up and Dance to work for us. This week, with four shows and being busy with Shut Up and Dance, is a bit crazy, but if you love what you’re doing, you just make it work.

It’s really important to me that I model for my daughter what following your passion and having a supportive partner looks like. She may not understand what it is I do, but she can see I’m chasing things I love.

Do you prefer to work solo or to collaborate?

I love collaborating. The writing process is usually a combination of the two. When you find another comic who you mesh with, someone you can go to when you need help finishing something off, it’s really helpful. Sometimes they can just find the last hook or beat you need to complete something. I love pitching ideas to people and having them come to life.

I spend a lot of my writing time pacing around my lounge talking into a bottle of shampoo, or I’ll be in the shower when something comes to me. Sometimes you do a show and afterward someone comes up and says you should finish on this and it’s just the perfect thing. I love that!

Where can you see Lesa next?

As part of the Fringe Festival, Lesa will be performing with Clarissa Chandrahasen in Sealed Section, 2-4 March at the Cavern Club.

What's inside this show's juicy sealed section? Ten easy ways to be out-feministed by a toddler! How to cope when you find out your crush votes Act (womp womp) and a quick how-to guide in convincing your colleagues you're working way harder than you really are.

Bossin' it? More like doing the bare minimum and ✨thriving✨.

Rip into the Sealed Section, a hilarious hour of stand up from Wellington favourites and all-round winners Clarissa Chandrahasen and Lesa MacLeod-Whiting.

Lesa is an award-winning Wellington-based comedian, writer and improviser.

In July 2020, armed with six minutes of jokes about Stage Challenge and thr*sh, Lesa began her stand up “career”, going on to nab the Runner Up spot at the Wellington Raw Comedy Quest and then nabbing no spot whatsoever at the National Raw Quest Finals. Despite this, she went on to win Best Newcomer at the 2020 Wellington Comedy Awards and is now a regular on the Wellington pro circuit.

Lesa has also been performing improvised comedy since 2016, and is a member of improv company Tiny Dog which performs a monthly show at Bats Theatre.

In 2019 Lesa co-wrote/directed/produced the sold out season of The Koru Hour for the NZICF.

Absurd characters and fast-paced silliness are her jam.