He Tohu exhibition looks back to the future

In a similar spirit to the 2018 New Zealand Festival's core celebration, A Waka Odyssey, the National Library of New Zealand's exhibition He Tohu looks to the past to help us navigate our future. This free exhibition in Wellington hosts three constitutional documents that continue to shape this country, including the Treaty of Waitangi and the Women’s Suffrage Petition. Among its highlights is an interactive map that traces settlement voyages, trade routes, and the passage of the treaty sheets around the country, telling the stories of Aotearoa in an engaging, accessible way. 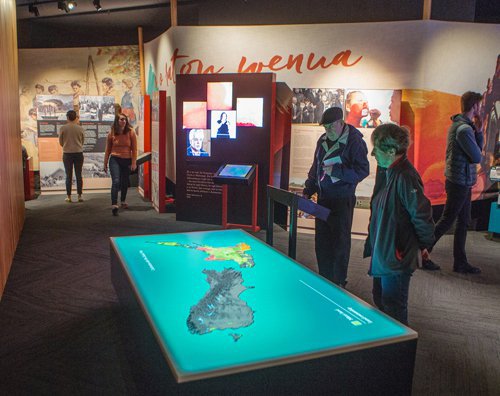 Entry to He Tohu is free. Open 9am to 5pm, Monday to Saturday, at the National Library of New Zealand with free guided experiences at 12.30pm each day.

When He Tohu (or ‘'The Signs’') opened at the National Library / Te Puna Mātauranga o Aotearoa in Wellington last year, it was something of an historic moment for New Zealand: a new, award-winning exhibition of our iconic constitutional documents developed in partnership between the Crown and Māori with an ambitious vision – He whakapapa kōrero, he whenua kura (Talking about our past to create a better future).

Featuring the 1835 He Whakaputanga o te Rangatiratanga o Nu Tireni or Declaration of Independence of the United Tribes of New Zealand, the 1840 Te Tiriti o Waitangi or Treaty of Waitangi, and the 1893 Women’s Suffrage Petition or Te Petihana Whakamana Pōti Wahine, the He Tohu exhibition was designed not only to preserve these precious original documents for generations to come, but also to encourage discussion and debate about what it means to be a New Zealander.

He Tohu was designed not only to preserve precious original documents for generations to come, but also to encourage discussion and debate about what it means to be a New Zealander

The first principle of the exhibition’s design was to protect and enhance the mana of the precious documents. The dominant feature of the space is the extraordinary curved document room (pictured below), inspired by a waka huia (traditional treasure box), built from hundreds of interlocking blocks of sustainably-sourced rimu. 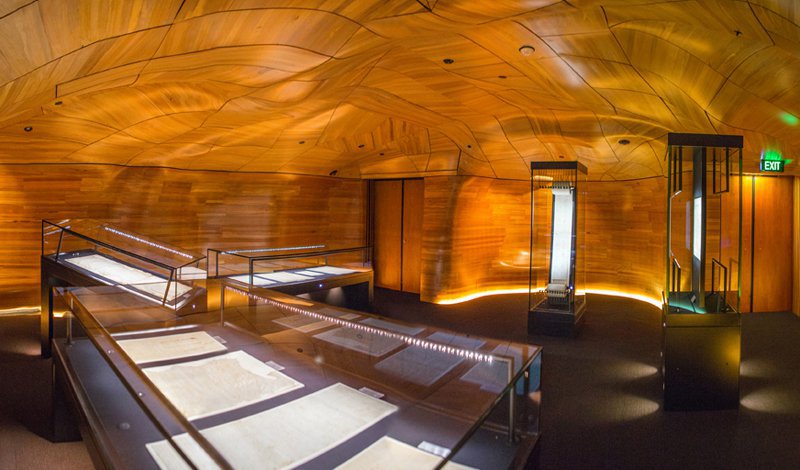 Alongside the historic documents and rich exhibition material, He Tohu remembers and celebrates our shared voyaging history and the arrival of Pacific waka to Aotearoa, via a stunning, interactive map table (see video below).

Like A Waka Odyssey, set to premiere at the 2018 New Zealand Festival, He Tohu brings historic stories of our journeys up close and parallels the words of A Waka Odyssey co-creator and navigator Hoturoa Barclay-Kerr: "Contrary to long-held Western beliefs, our voyaging ancestors weren’t just larking around or accidentally washed out to sea to luckily wash up on Aotearoa’s shores. They were acting on significant traditional knowledge and undertook their voyages with a spirit of exploration equal to that of any classical hero."

Presented in a unique partnership between the Waka Odyssey Creative Team*, New Zealand Festival and Te Āti Awa / Taranaki Whānui Iwi, A Waka Odyssey will welcome a spectacular fleet of waka hourua (twin-hulled ocean-going waka) from around the Pacific and Aotearoa to Wellington Harbour on 23 February in a mass celebration that opens New Zealand’s largest arts Festival.

He Tohu has gathered a swag of accolades since it opened, including seven awards in the prestigious Designers’ Institute of New Zealand’s Best Design awards in October. But perhaps the best endorsement has come from the public, with more than 30,000 visitors in the eight months since its opening, including thousands of school children. “The new home for the Treaty of Waitangi is pretty cool... the document is an emblem both of our colonial failings and, in its new setting, of a rediscovered sense of national honour. Go see it as soon as you can" (Dominion Post).

Delve into our shared past, and look to our future, at this important national exhibition.