The Lost Generation on stage: The Select

In this era of third wave feminism and the #MeToo movement, Ernest Hemingway’s brand of machismo might seem hopelessly antiquated. Or maybe not, argues David O'Donnell, ahead of Elevator Repair Service's celebrated stage adaptation of The Sun Also Rises at NZ Festival next month. 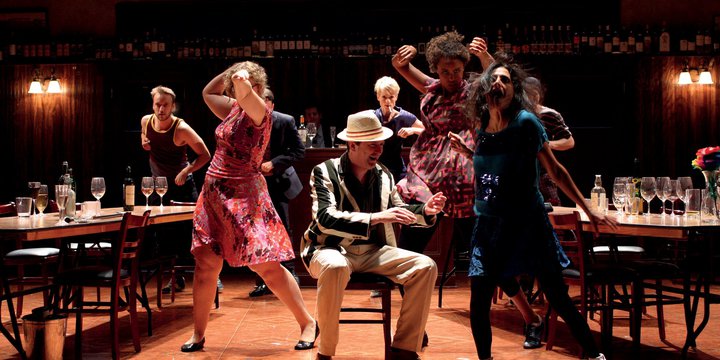 The Select (The Sun Also Rises) runs 24 Feb - 1 March at the Opera House. Get your tickets here.

“Where do you want to go?” I asked. Brett turned her head away.

“Café Select,” I told the driver. “Boulevard Montparnasse.” We drove straight down, turning around the Lion de Belfort that guards the passing Montrouge trams. Brett looked straight ahead. On the Boulevard Raspail, with the lights of Montparnasse in sight, Brett said: “Would you mind very much if I asked you to do something?”

“Kiss me just once before we get there" - Ernest Hemingway, The Sun Also Rises

In this era of third wave feminism, the #MeToo campaign and the recent protest against male power abuse at the Golden Globes, it might seem that Ernest Hemingway’s relentless brand of machismo is hopelessly antiquated. When Hemingway’s one and only play The Fifth Column was produced at the Southwark Playhouse in 2016 The Telegraph complained, “it’s horribly dated and its sexual politics stink to high heaven.” Yet the last few years have seen a revival of interest in adapting Hemingway’s best novels for the theatre, where they are finding enthusiastic audiences. In the U.S, a 2010 adaptation of The Old Man and the Sea by the Caldwell Theatre was praised by Variety for its inventive staging of life as a battle with nature, and for its exploration of “issues of identity, masculinity and duty.” A U.K. production of A Farewell to Arms (2014) was described by The Guardian as “a vivid physical equivalent to Hemingway’s stark prose style.” 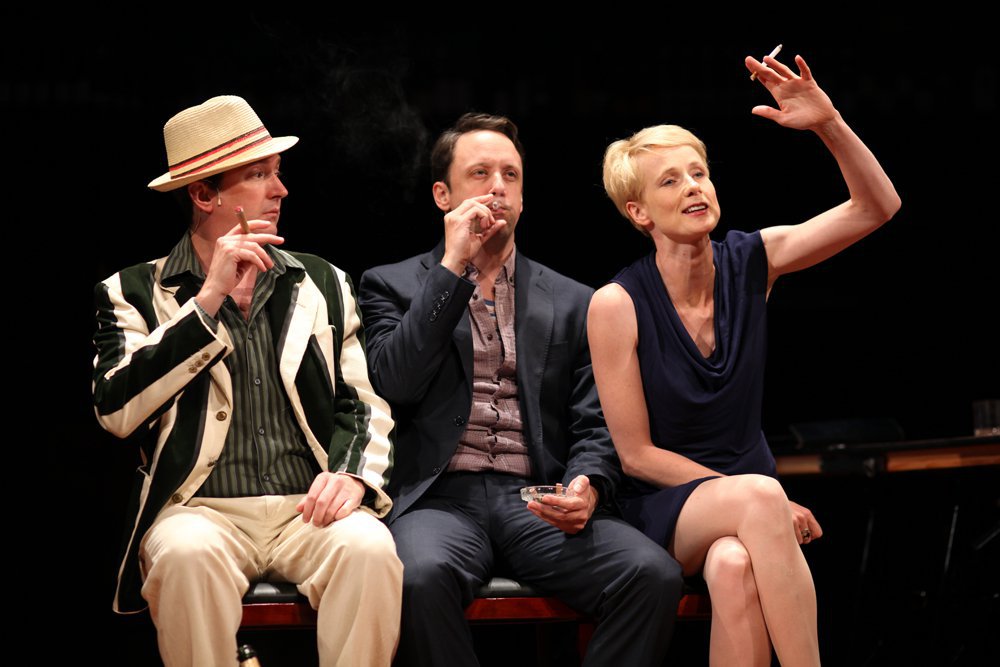 In late February 2018 the New Zealand Festival will present one of the Elevator Repair Service’s high profile shows,The Select, an adaptation of Hemingway’s first novel The Sun Also Rises (1926). The title honours one of the Paris cafés featured in the book. The Select has played a sweep of arts festivals since its debut in 2009, directed by John Collins who founded Elevator Repair Service in 1991. This award-winning, experimental New York theatre company has received accolades for its adaptations of literary classics such as Gatz (2010) an 8-hour performance of the entire text of F. Scott Fitzgerald’s The Great Gatsby. Like Gatsby, The Sun Also Rises is one of the masterpieces from that group of writers dubbed the “Lost Generation” by Gertrude Stein, those who lived through the miseries of the First World War, losing both their adolescence and innocence as they moved from the U.S. to Europe and plunged into the reckless 1920s.

Part of the appeal of The Select is undoubtedly its origins in Hemingway’s early Paris period. The romance of the starving artists of la Rive Gauche penning articles and novels in cafés lingers. As I’ve observed on several trips to Paris, the same cafés are considerably more upmarket these days, but still patronised by solo young writers clutching leather notebooks and hoping to be visited by the muses of Hemingway, Fitzgerald, Stein or James Joyce. In the Closerie des Lilas at 171 Boulevard du Montparnasse, where Hemingway wrote much of The Sun Also Rises, there’s a nameplate on the bar at the spot where he supposedly worked. Hemingway charted this period in his memoir A Moveable Feast, where he writes of the joy of writing in cafés: “The blue-backed notebooks, the two pencils and the pencil sharpener, the marble-topped tables, the smell of café crèmes, the smell of early morning sweeping out and mopping and luck were all you needed.” While writing in cafés has never gone out of style, the café itself, with its transient hard-drinking lifestyle, is an apt metaphor for the increasing mobilities of the postmodern era.

Part of the appeal of The Select is undoubtedly its origins in Hemingway’s early Paris period. The romance of the starving artists of la Rive Gauche penning articles and novels in cafes lingers

In 2013 I succumbed to the allure of literary Paris, bought a used copy of The Sun Also Rises from Shakespeare and Co, and read it in the Closerie, soaking up the traces of a century of artistic ambience. For disillusioned young artists like Hemingway and Fitzgerald, Paris was an enticing mix of exile, eroticism and freedom from convention. Hemingway’s quest to write “simple true sentences” gave his writing a remarkable freshness and directness that made him one of America’s greatest modernist writers.

The Sun Also Rises exemplifies that advice to young writers, “write what you know.” Like his world-weary, persistently hungover narrator Jake Barnes, Hemingway was seriously wounded in the war. His crisp, spare prose expertly captures the mood of a moment in history, vividly evoking the expatriate community in 1920s Paris, distilling their casual flings and restless café cruising into striking vignettes, which make rich material for stage adaptation. Hemingway has the ability to sum up a character in a few carefully chosen phrases. The English aristocrat Lady Brett Ashley has a long neck, wears men’s felt hats and her hair is brushed back like a boy’s. Jake loves Brett, but has been made impotent by his war wound, so Brett strays in search of more virile men. Jake’s sexual frustration mirrors the loss of purpose and lack of direction of the Lost Generation, for whom booze, fights, petty romances and aimless partying are intoxicating distractions to the meaninglessness of their lives. Halfway through the novel, the group set off on a tour of Spain, taking in more of Hemingway’s favourite pastimes such as trout fishing, bullfighting and the revelry of the fiesta at Pamplona. 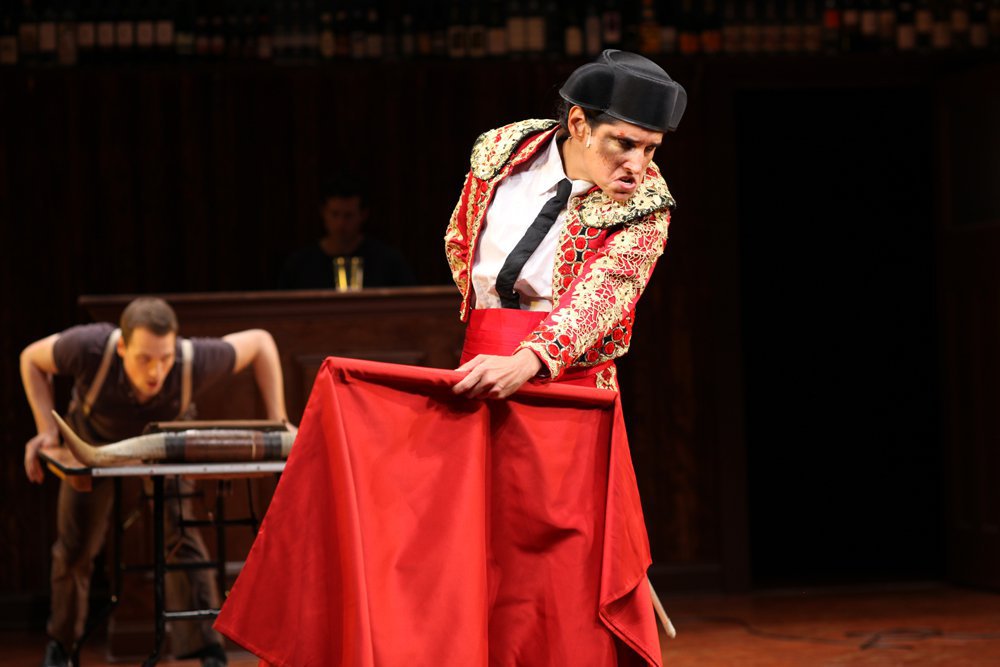 His crisp, spare prose expertly captures the mood of a moment in history, vividly evoking the expatriate community in 1920s Paris, distilling their casual flings and restless café cruising into striking vignettes, which make rich material for stage adaptation

Like all their shows, The Select results from a long, exploratory gestation process for Elevator Repair Service. The Select has received excellent reviews internationally, as critics fall for the exhilarating choreography, the sensual acting, the dynamic staging of the climactic bullfight and the multi-layered eclectic soundtrack. The New York Times describes Collins’ direction as “endlessly inventive”. The Scotsman suggests that the characters with “their drinking, their despair, their casual or doomed relationships – have a tremendous contemporary resonance.”

Could it be that Hemingway - with his frank insights into masculinity, gendered power games and existential crisis - has a particular relevance for the mind-boggling problems facing the world at present? And that the embodied, experimental theatricality of the Elevator Repair Service is the perfect medium to explore all of that?

Could it be that Hemingway - with his frank insights into masculinity, gendered power games and existential crisis - has a particular relevance for the mind-boggling problems facing the world at present?

David is Head of School of English, Film, Theatre and Media Studies at Victoria University of Wellington.