A Slightly Isolated Dog is back with The Trojan War, their latest rambunctious work. We chatted to director Leo Gene Peters about the new work being a wild dress-up party with explosive wit to create an entertaining romp. 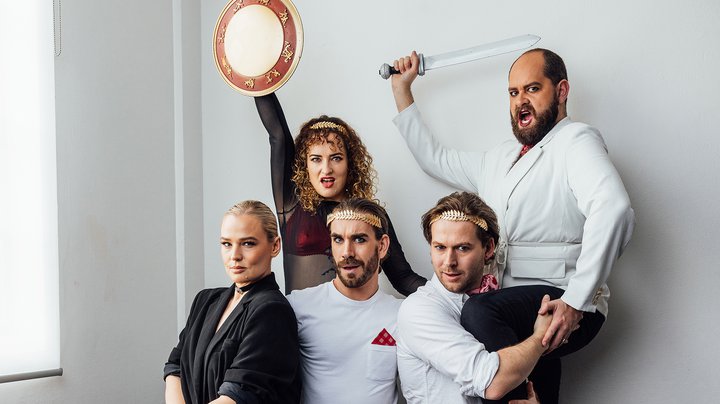 Described as theatre meets a wild dress-up party with explosive wit to create an entertaining romp – what can audiences expect in this new work?

Audiences can expect a chaotic and hilarious night out – it’s a great thing to do with a group of friends, or on a date, or even as an office gathering. Every time we perform these kinds of shows, the audience becomes a little tightknit community for the night. It’s like going to a great dinner party with 5 of your funniest friends. And they also sing beautifully for you and constantly tell you how beautiful and amazing you are. It’s joyous and raucous night out – guaranteed to never be boring.

How did the concept for The Trojan War come about?

We started making this show in 2019 – and had intended to perform it in 2020, but didn’t know what story we should tell. So, when lockdown happened, we decided to develop the work virtually and we reached out to our community online and asked for their suggestions. We then made small zoom versions of all the stories people suggested. This was loads of fun and helped us evaluate what kinds of stories might work for us. Someone suggested the Trojan War and we looked into and then we made a digital version. The story made sense, so we decided to go with it.

What excites you most about sharing The Trojan War, the third work in the trilogy, with Te Whanganui-a-Tara audiences?

We first made Don Juan here in 2015 and then made Jekyll & Hyde here in 2016; Wellington has been a home for the company for a long time. We also haven’t performed these kinds of shows in Poneke since 2018 – after numerous cancellations over the last 3 years. So, we’re really excited to meet our old friends again and have them along for this new adventure.

How did you go about selecting a cast? And why was this important to the work?

Most of this group had worked together for the last several years. Whenever we’re trying to find collaborators, we’re always looking for people that share the same values around the work and want to work in our collaborative process. Sense of humour is very important – people that can celebrate how ridiculous and consequently delightful life can be, even when it’s hard. This is also a very specific kind of work that requires a specific kind of performer: someone who enjoys playing with an audience and thrives with the uncertainty and spontaneity of that.

Were there any unexpected and enlightening moments during the rehearsal process?

We’ve been surprised by how some of the events and themes from the story of The Trojan War are really relevant to today in unexpected ways (which sounds like a tremendous cliché, but it’s true). Especially around how fatigued and tired people are at the moment – and needing to muster the willpower to keep going. It’s been lovely to make with those questions in really ridiculous and hilarious ways – taking this very real and challenging issue of exhaustion and playing with it in a way that celebrates people and the ridiculousness of our time and creates joy from something so difficult. Also, there’s been a lot of great sexy innuendo.

What were your inspirations that influenced this production?

I grew up with a lot of old school sketch comedy shows like Kids in the Hall, The State, and Monty Python – and the comedy of Eddie Izzard. And then I really loved The Mighty Boosh when they came out. Those are all big influences on this work – along with wanting to make something that was fast and chaotic and always entertaining and with the audience – something with the energy of a very acrobatic and unrelenting cabaret.