Sunday Mixtape is a programme of brand new music commissioned specifically for the 2022 Wellington Jazz Festival. We talked to the three musicians whose works will premiere this Sunday 23 October about what we can expect and what inspired their compositions. 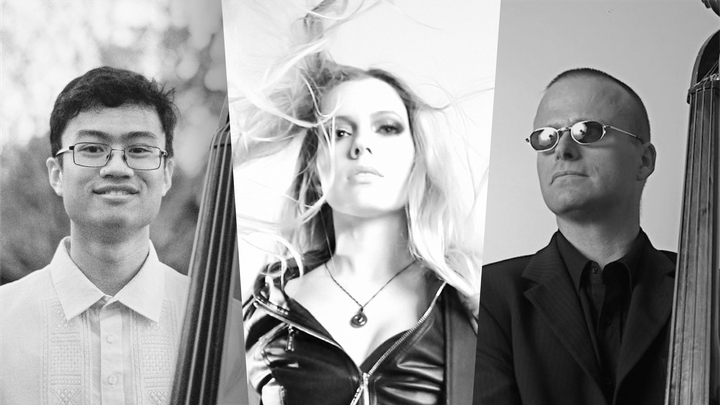 What can audiences expect from your Sunday Mixtape composition?

Seth Boy: My composition Farewell, Sweet Stranger is set in two parts, the first highlighting and contrasting both the native and the colonial aspects of Filipino history, and the second telling of the journey of becoming distanced from your culture, home, or people. The story of the piece is centred around longing and loss, so it starts off tender but quickly becomes brash and very upfront.

Sally Gates: The composition is very textural, abstract, and ambient. Almost like a soundtrack or sound-painting. Written for solo guitar, there is a contrast of sparseness and vulnerability against denser layers created by looping motifs in real time.

Olivier Holland: The composition is a suite of three pieces that each explore a different rhythm (exotic as in unconventional and not-so-often-used in jazz). All three rhythm styles are ‘driving’, ‘energetic’, “exotic”, stimulating.

The first piece is composed in Algerian RAI Music style, a genre that received a lot of attention through Sting’s song Desert Rose, sung by Cheb Mami, a famous Algerian RAI singer.

The second piece is written in Zimbabwean “Mhande” style, a driving, exhilarating rhythm that is traditionally performed as a dance, with performers wearing shakers around their ankles. This dance/rhythm in its native form is performed during harvest celebrations in Zimbabwe.
The third piece is a ‘Euro-style’ “odd-time” rhythm that contrasts the previous two.

Take these three rhythmic styles, infuse it with jazz – that’s what I think best describes my upcoming performance at Sunday Mixtape.

What was the inspiration for your piece?

Seth Boy: It features variations reiterating Tagalog folk melodies and stories, rhythms and harmony brought in by the Kastila (Spanish colonists), and jazz/swing inspired by the likes of Charles Mingus, Duke Ellington, and John Coltrane.

Sally Gates: Thought & Terraform explores the premise that thought and consciousness are what dictate the world around us, both physical and causal. We shape our own realities through perception.

Moving through this hallucinatory nature of reality, the piece derives themes from surrealism, neuroscience, and science fiction. On a visceral level, it incorporates a personal reflection of my experience returning home to New Zealand after four years in New York, bringing a contrast of exuberance and relief to improvisational passages.

Olivier Holland: Rai Monde (RAI style): During my time in Germany (I am originally from there) I was close friends – and ‘grew up’ musically with Djamel Laroussi, a RAI musician from Algeria. We played a lot of music together and of course he introduced me to RAI music. My passion for this type of music was the inspiration to include this style in the composition portfolio.

For Thabani (Mhande style): I have been fortunate to supervise Zimbabwean saxophonist Thabani Gapara for his master’s thesis about Zimbabwean music. The music made quite an impression on me which is the reason I included ‘Mhande’ in this folio.

7th Battle: Originally from Europe, I felt strongly about including a piece that uses a European odd-time feel in 5/4 time that gradually morphs into a 12/8 style shuffle, to finish this suite of three tunes with a ‘bang’.

Sunday Mixtape headlines the Wellington Jazz Festival on Sunday 23 October, 1pm at the Opera House . Find out more and secure your tickets here.