In our second look at Matariki, Tama Ale Samoa takes us through the celebration of te Whāngai hau. 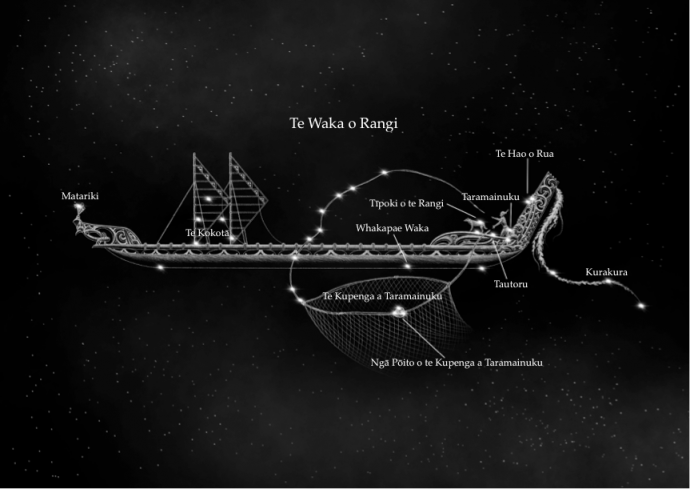 This photo depicts the Waka of Rangi, where upon our dead take their last journey. At the Stern is Orion’s Belt, at the Prow is Matariki. Mānawatia a Matariki – Happy Māori New Year!

This week, we look at one of the most important aspects of Matariki, the Whāngai hau.

The Whāngai hau is an ancient ceremony used by the Māori to give thanks to the gods. One god in particular was very important, in terms of providing sustenance for mankind throughout the year. She is the giver of food, water and medicine. This god or goddess is none other than Matariki.

In our last ARTicle we spoke of two practices that take place during the Māori New Year, more commonly known as Matariki. The Whāngai hau is the most important part of the Māori new year celebrations. The Whāngai hau is essentially a sacrifice of food to the gods. This sacrifice was in the form of a Hāngī, or an earth oven cooked meal. This Hāngī consist of a bird for Tupu a Rangi, a vegetable for Tupu a Nuku, a freshwater fish for Waitī, and a seawater fish for Waitā, the stars who give us food.

During the correct phase of the correct lunar month, our tohunga would execute the practices mentioned in our last ARTicle to make predictions for the year to come. To start with, they would call out the names of all those who have passed within the year that is being farewelled, and those souls are then placed upon Pōhutukawa. In addition, the people would then place upon Hiwaiterangi their dreams and aspirations. To conclude, they would then uncover the hāngī that has been specially prepared for Matariki. As the steam rises, Matariki and her children feast.

The sole purpose of this ceremony is to thank Matariki and her children for the bounty of food they give, year in, year out. In more correct terms, this ceremony is called Te Umu Kohukohu Whetū or the steaming oven of the Stars.

All information on Matariki found in our ARTicle is sourced from Professor Rangi Matamua’s book Matariki: The Star of the Year.

Want the full ARTicle in your inbox?

Top image via the Royal Society