Trick of the Light Theatre have just celebrated their 10th anniversary by revisiting their first show, The Engine Room ahead of their Wellington premiere of a new work, The Griegol. We spoke to their Co-director Ralph McCubbin Howell about the company and how to remain together for a decade. 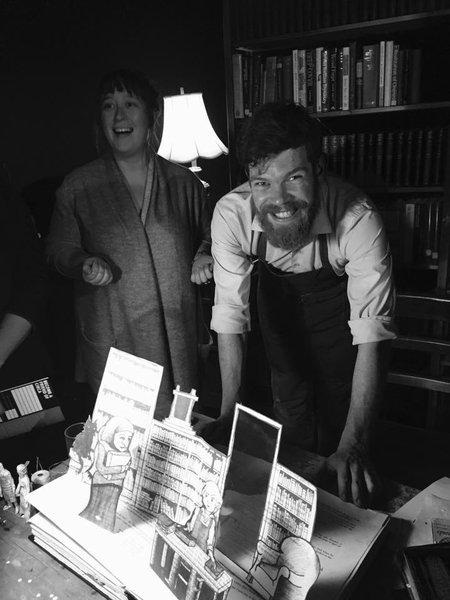 It must be a strange feeling to be revisiting your first play the same week as premiering a new one. How has your process changed between the two?

It is strange, but it’s exciting to see them side by side. With many of our shows since then we’ve consciously made them to tour, and we're notorious tinkerers so they continue to evolve. The Engine Room was a one-off, timed to coincide with the concurrence of a general election, a rugby world cup and the 30th anniversary of the Springbok Tour protests. It was the first script I'd written by myself, and it wove in real events so it involved a heap of research. I was only able to see opening night before I shifted to the UK, so in some ways it feels like a real time capsule, though it carries some new resonances in 2022 - the contest between Ardern and Luxon has definite echoes of Clark vs Key, there's another rugby world cup in NZ, and this year saw some (very different) protests on our streets.

The Griegol is unique amongst our works because it's a show without words, but also because our process was so affected by the lockdown - in place of workshopping a script with actors in a room, Hannah and I wrote the show as a storyboard and then bounced ideas back and forth online with our composer Tane Upjohn-Beatson. I don’t know if there’s a direct evolution of process you can trace between the two because they’re such different works made in such different circumstances, but we’ve certainly grown more confident in making things to tour, in seeing the premiere season as a step in a show's evolution, and in experimenting with forms.

As a company, Trick of the Light has performed overseas as well as at home. Are there significant differences between performing abroad and at home?

Every audience is its own beastie, and we've had lovely responses in all sorts of far flung places. American audiences love to clap. Australians love to laugh. English audiences can be a bit English. Our work is rooted in Aotearoa, so there are some details that resonate with an audience at home differently than overseas. We made The Griegol without words in part so it could one day play beyond the English-speaking world - would love to see how our work lands further afield.

What can audiences expect from The Griegol?

It's our most ambitious work in terms of its staging - something like watching a silent film made live before your eyes through silhouette, puppetry, projection and the world's most high tech OHP. The story's dark, funny and moving - it's a play about death, but it isn't a downer - and the whole thing plays out like a dance to this beautiful score by Tane Upjohn-Beatson with live violin by Tristan Carter that gets you right in the feels.

What inspires you to write a play?

It's always a combination of things, and it's hard to pin down in retrospect. There's often a political streak to our work, but with The Engine Room this was overt - borne from this strange alignment of some eclectic events, and rage against the shallow, self-serving, yeah-nah-shrug leadership of National under John Key. The Griegol is a much more personal work - my cousin died and then Hannah's dad died and then we went into a pandemic. It is a universal story, perhaps especially because it's a work without words, but it was made in direct response to these experiences we were processing.

What does it take to keep a theatre company together and working for ten years?

The pandemic years have been hard, and arts funding right now is harder. For a long time we wanted to expand and get a permanent base, and we still wish we were able to share the workload because it can be relentless, but I think being small and fleet footed has helped us be resilient. We make the work we want to see, and we'll change what we're doing if something's not working.