In his recurring segment A Window into Te Ao Māori, Tama Ale Samoa takes it back to the beginning, with the Māori creation story. 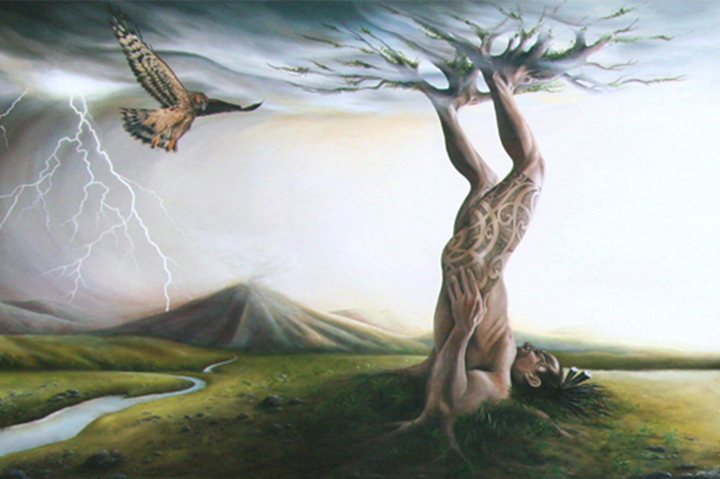 Following on from our last Pūrākau poto, this week we take a shallow dip in the waters of Māori customs, science, spirituality and beliefs. We won’t even get our knees wet, but a crisp cold sensation to the toes is enough to know whether you want to fully immerse yourself or not.

This week we look at the genesis story of the Māori, this story holds a whole wide range of different aspects of Māori knowledge, and over the next weeks we will one at a time unpick each and every aspect seen within the story below, so this story will act as our reference point.

The Beginning according to common Māori folklore

In the beginning was the great void, or Te Kore. In the great void two beings came into existence, Ranginui Sky father and Papatuanuku Earth mother. In that moment, the great void became the great night, a time period known to Māori as Te Pō.

In a deep embrace, Ranginui and Papatuanuku conceived and had many children, 77 in total according to my people of the Aotea waka, and they all lived in between their parents seemingly never-ending embrace. After some time, a lot of Ranginui and Papatuanuku’s children grew tired of the cramped, cold, wet and damp conditions they lived in and wished to be free of their parents’ embrace. After much discussion and debate the majority came to an agreement that they will separate their parents by force. One by one they tried to separate their parents, but to no avail.

Then came Tāne, one of the many offspring of Ranginui and Papatuanuku. He is the god of the forest. He laid down with his back upon his mother and his feet upwards towards his father and with all his strength he pushed and pushed and eventually separated heaven from earth, bringing forth the new world. As the dawn of a new era emerged, Papatuanuku, the earth mother, wailed and mourned as she was parted from her husband Ranginui. This wailing gave birth to the hotu of Māori women that is still heard today at tangihanga or Pōwhiri.

Ranginui was fixed to the heavens by three post erected by Tū Tāne and Rongo. Tāne decorated the chest of his father with the stars, moon and sun. He then clothed his mother with trees and shrubs and with the help of his siblings they all ensure that their parents are healthy and well for they are the mouri or life force of all things.

The separation was agreed upon by most of the children, however two of them did not. They were Tāwhiri Mātea, god of the winds rain thunder and lightning and Rūaimoko, god of earthquakes and volcanoes. Following the separation of their parents, Tāwhiri Mātea fled to the skies to remain with his father, and Rūaimoko returned to the womb of Papatuanuku, so both Ranginui and Papatuanuku were taken care of by their children. These two brothers endlessly exact revenge on their siblings for the separation of their parents, by flooding, storming and bringing destruction upon their siblings. Tāwhiri Mātea was so hurt by the separation of his parents that he ripped out his own eyes, crushed them in his hands and cast them into the sky as a sign of love to his father. His eyes became known as Ngā mata o te ariki Tāwhiri Mātea, or in short , Matariki, the Pleiades Constellation.

So, there the gods dwelled within their new world and many more stories followed.